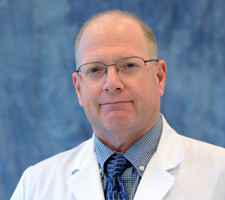 Following his training, Dr. Watson traveled to Albuquerque, New Mexico, where he practiced spinal surgery until the end of 1989, when he moved his practice to Fresno in order to be closer to family. Since that time, Dr. Watson’s focus has been on spinal disorders of children and adults. He has special interests in minimally invasive spine surgery and in children’s spine problems and participates in the care of scoliosis and deformities at Children’s Hospital of Central California.

The predominance of his work, however, is in the treatment of degenerative/traumatic disorders of the cervical, thoracic, and lumbar spine.

Dr. Watson is married and has two children. His hobbies include woodworking, automobile restoration, amateur automobile racing, and flying helicopters.

Dr. Watson accepts patients, both adults and children, with spine disorders. He also deals with medical legal issues in patients with spine problems and treats workers’ compensation as well as non-work related spine injuries and disorders.